For gamers and more versatile users, the Lenovo Legion 5 15ACH6H (82JU00CJFR) has several strengths to its name. It contains a powerful AMD Ryzen 7 Octo Core processor coupled with a major graphics card, the GeForce RTX 3060 Ampere. These key components are assisted by 8GB of RAM, fast 512GB SSD storage, and a 120Hz FHD IPS display to serve system fluidity. The metal frame is also equipped with an advanced cooling system, a correct connection with charging via USB-C and a backlit keyboard to which is added a beautiful autonomy of 7 hours. On the other hand, we have already seen 15 inches more compact and the RAM memory is limited. 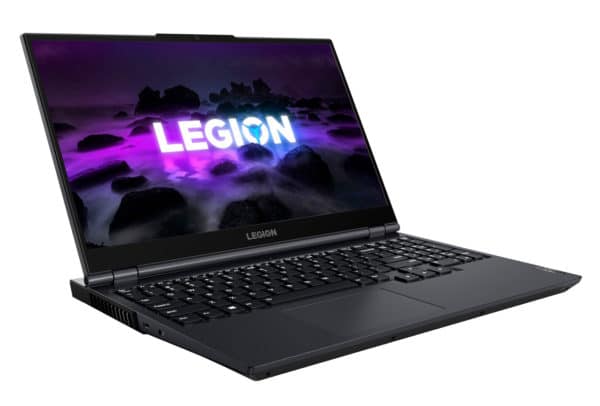 The Lenovo Legion 5 15ACH6H (82JU00CJFR) stood out in our comparison thanks to its balanced and powerful configuration. Its autonomy and its design are other elements to take into account.

If this Lenovo Legion 5 15ACH6H (82JU00CJFR) does not meet all your criteria, you will find other configurations to play with a similar budget in our guide to gaming laptops. For the same budget, choose the model that has the most powerful graphics card, it will have the most impact on performance.

For 2021, Lenovo preserves most of the aesthetics observed on the Legion 5 of last year with its aluminum case which plays the card of sobriety with smooth and matt surfaces all around. A dark blue color comes to dress this model. It’s very discreet and close to black, but it has the merit of standing out from the crowd. Roughly speaking, the Lenovo Legion 5 15ACH6H is serious on the inside front view and more original on the back. Its cover houses a Legion logo with colorful reflections while the back of the base is much more intimidating with its protruding vents.

The measurements of the case do not move much. We remain within a few millimeters at the level of the previous model with a footprint of 362.5 x 260.6 mm and a thickness of 25.7 mm. Its weight is still controlled around 2.4 kg. The keyboard is backlit on a single white shade, which limits customization, but contributes to the neutral side of the PC.

The screen applies to a 15.6-inch slab 120Hz refresh, enough to enjoy a lively rendering in action. Following the trend, it opts for an edge-to-edge design on three edges for a fairly immersive rendering, amplified by the IPS panel and its wide viewing angles. In addition, the Full HD definition (1920 x 1080 px) is the most suitable for gamers and allows you to get the best out of your High Definition content while the anti-reflective treatment prevents ambient light from being reflected on the screen, improving playing comfort (especially in dark scenes).

The connections of the Legion 5 15ACH6H are distributed mainly on the back and on each side. Only 1 USB 3.2 port and a USB 3.2 Type-C port dress the sides with the headphone jack. The rear gathers everything else: one HDMI 2.1 port, three other USB 3.2 ports, one port USB Type-C Gen2 additional (one of the two supports the power supply), an RJ45 Ethernet port, the power socket and a lock. The interfaces offered are worthy of a gaming PC at this level even if the card reader is absent, the mini-DisplayPort has disappeared and the Thunderbolt is absent due to the AMD processor. Wireless modules offer Wifi 6 (802.11 ax) and Bluetooth 5.1. There is no biometric login option (Windows Hello). 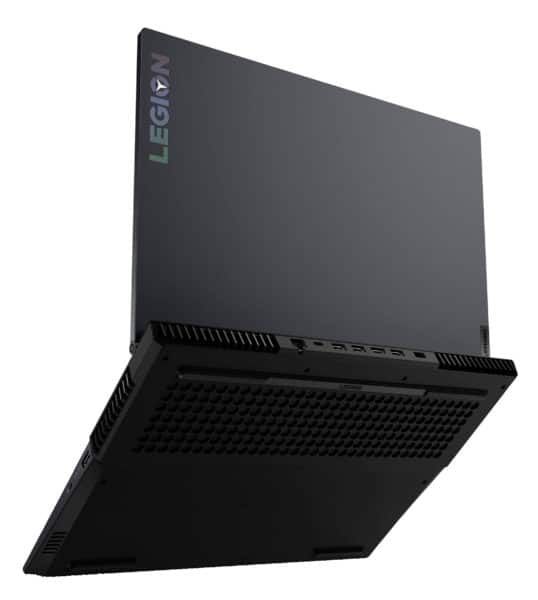 The component that draws all the attention here is the graphics card, a GeForce RTX 3060 generation Ampere (2021). This is a high-end GPU capable of meeting the needs of demanding gamers, exceeding the capabilities of a GeForce RTX 2070 (Super) Turing. It is able to ensure a smooth quality rendering on all of the user’s favorite games, by taking advantage of Ray-Tracing on compatible games with advanced details and a respectable number of FPS. The RTX 3060 is also invaluable for software that harnesses GPU computing power to speed up processing. This is for example the case in multimedia under Sony Vegas or Adobe Première / Photoshop, which will interest creators, especially with 6 GB GDDR6 of dedicated memory.

Opposite, we do not have just any processor. This is a AMD Ryzen 7 5800H Octo Core Cezanne (2021). It is only just starting to be deployed, but its performance is already being talked about. Indeed, it delivers something to satisfy the most demanding of you with capacities close to those of an Intel Core i9-10880H Octo Core and anyway much higher than those of an Intel Hexa Core (i7 -10750H). In fact, tasks capable of using the 8 cores, such as certain content creation, 3D modeling or video editing software, will find the perfect working support here.

For its part, storage is entrusted to a SSD NVMe PCIe de 512 Go which will significantly strengthen the overall responsiveness of the system on a daily basis. Overall quieter, more robust and more energy efficient than a mechanical disk, it allows Windows to achieve a remarkable level of fluidity with short loading times and a performance without latencies. What is more, its capacity is not ridiculous and can accommodate a good part of your game library even if some will not find it sufficient. In this case, you can perfectly open the PC and upgrade the components. A second M.2 port is free inside.

A word finally on the battery which is provided on this model with an honest capacity (60 Whr), enough to reach easily 7 hours of battery life by limiting yourself to low-consumption tasks (basic surfing, Office suite, etc.). It’s amazing for this type of energy-hungry gaming PC. Valuable, the RapidCharge Pro feature allows the Legion to regain 50% charge in less than 30 minutes. 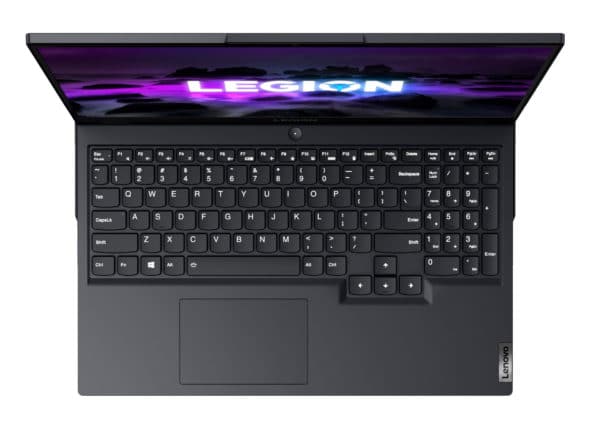 Slime Rancher 2 release date, when is the game released? – Breakflip

Lizy emancipates herself and becomes a real leasing company