While 4K is just becoming more democratic, Samsung is already offering 8K televisions. But how can you take advantage of such screen definition when native 8K content is still rare. Samsung’s answer with its latest generations of Neo-QLED TVs can be summed up in one word: upscaling. An area in which the Korean brand has unparalleled expertise.

Samsung is one of the first television manufacturers to make 8K definition accessible. More than a simple bidding, 8K is a real argument for lovers of beautiful images. Not only does this definition lend itself particularly well to large screens, but it also makes it possible to obtain a much higher image fineness even if the content displayed is only in 4K. We explain how Samsung managed to achieve this feat thanks to its mastery of upscaling on its latest Neo QLED 8K televisions, in particular the Samsung Neo QLED QN900A and Samsung QLED QN800A.

4K televisions display a definition of 3,840 x 2,160 pixels, compared to 7,680 x 4,320 pixels for 8K. But better definition does not always mean better display finesse. The latter actually depends on the resolution, which is expressed in number of pixels per inch (we explain the difference between definition and resolution in this article). However, the larger the television, the higher the resolution must be to ensure the best rendering. Up to 55 inches, 4K is more than enough. But as soon as we talk about very large screens (65, 75 or 85 inches), it is behind the 8K which displays 2.4 times more pixels per inch. For example, an 85-inch 4K TV lines up 52 ppi versus 125 ppi for an 8K. As a result, the eye will then catch much more details and nuances. 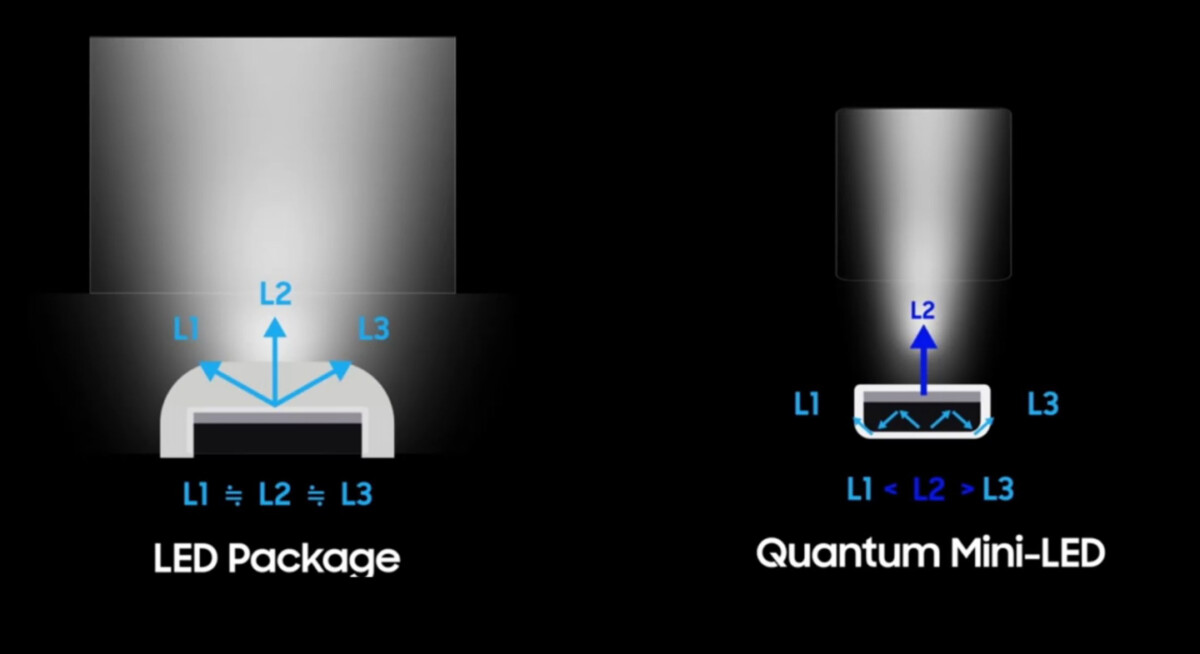 But we are in 2021 and native 8K content is still scarce. Admittedly, the YouTube application offers 8K videos on some channels, but this is not yet the norm. However, since 2019, Samsung televisions have included The Explorers application, a video platform specializing in native 4K and 8K video. She has a large library of documentary content ideal for testing her latest Samsung TV. Finally, if you have a Samsung Galaxy S21 or Galaxy S20 smartphone, you will be able to see the 8K videos that they are capable of filming on the big screen. 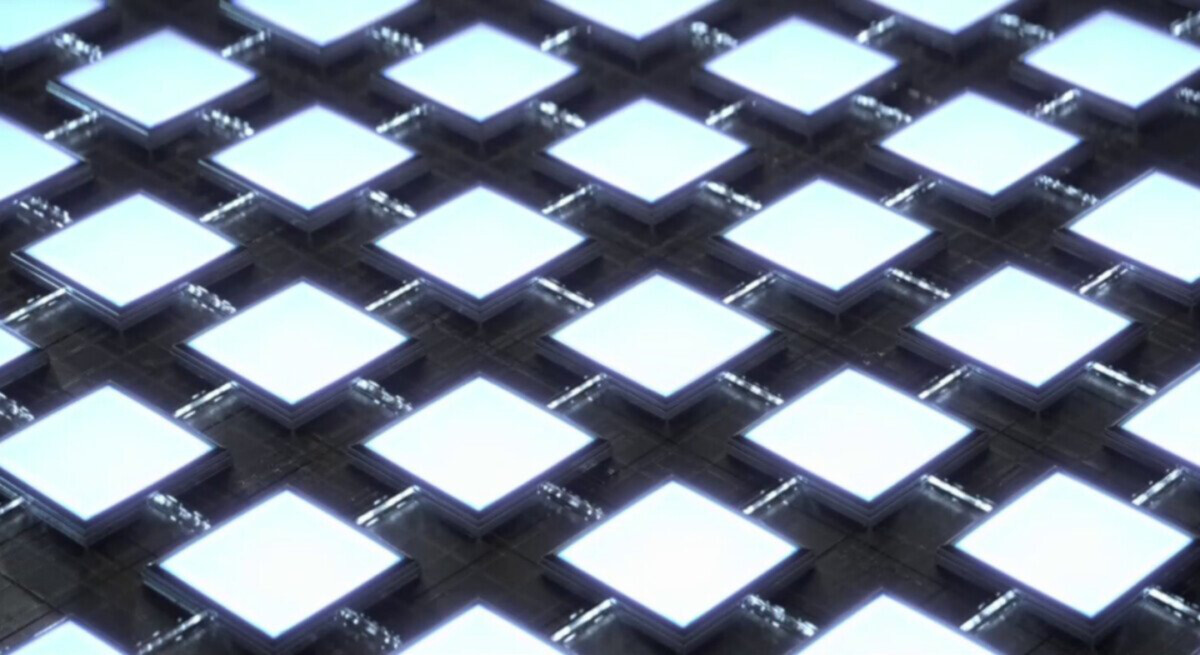 Samsung is well aware of this scarcity of 8K content. And cleverly, the Korean brand does not count on it to promote the 8K definition of its latest televisions. In fact, Samsung relies on its expertise in image processing. Thanks to its mastery of upscaling, it is able to render “simple” images or 4K content much more precise and detailed on an 8K screen than on a simple 4K television.

Upscaling, or scaling in French, basically consists of moving an image from a given definition to a higher definition. In the case that interests us, to switch the image from 4K to 8K format. Thanks to its Samsung Neo Quantum Processor Samsung goes well beyond this single operation. Indeed, it embeds 16 neural network models that rely on artificial intelligence and deep learning. Thus, they are “trained” in upscaling as a base and will each be responsible for processing specific data from the source in 4K. The resulting display is sharper, benefits from much more precise microcontrasts for an image that gains in detail and sharpness. These are all assets that the HDR10 + format exploits, which significantly broadens the range of contrasts, for a rendering that reveals all the nuances of video content.

This riot of technology takes full advantage of the intrinsic qualities of the support that is the Neo QLED. This display technology combines a QLED panel which provides high-end colorimetry and a Mini LED backlight which offers much higher brightness, and above all precise, than what the market usually offers. Added to this are also all the basic options of Samsung’s high-end televisions, such as the AutoMotion Plus motion compensation engine and the 120Hz panel, which ensure flawless animation, so you can enjoy every detail even in dramatic scenes. fastest action.

Thus, the 8K upscaling by Samsung takes advantage of the resolution 2.4 times higher than that of 4K to amplify the details, the nuances of the image and especially to make them visible to the naked eye. This means in practice that all your 4K content, from Blu-Ray to movies and series on Prime Video, Disney + or Netflix will be displayed in 8K without any loss of detail on Samsung Neo-QLED 8K televisions, like the Samsung Neo QLED QN900A or Samsung QLED QN800A.

3D modeling, textures, light effects, video games benefit just as much as video from 8K to enhance the work of artists and developers. The latest console generation, represented by the PlayStation 5 and Xbox Series X, is already technically capable of supporting future titles in 8K definition. Although it will take a few more months for the developers to draw the full power of these consoles, the excellent game Ori and the Will of the Wisps already takes advantage of a 6K mode at 60 frames per second. For those in a hurry, you can also plug in behind Samsung 8K televisions a PC with the latest generation of 3D graphics cards, such as the Nvidia RTX 3090 which is cut for PC video games in 8k. 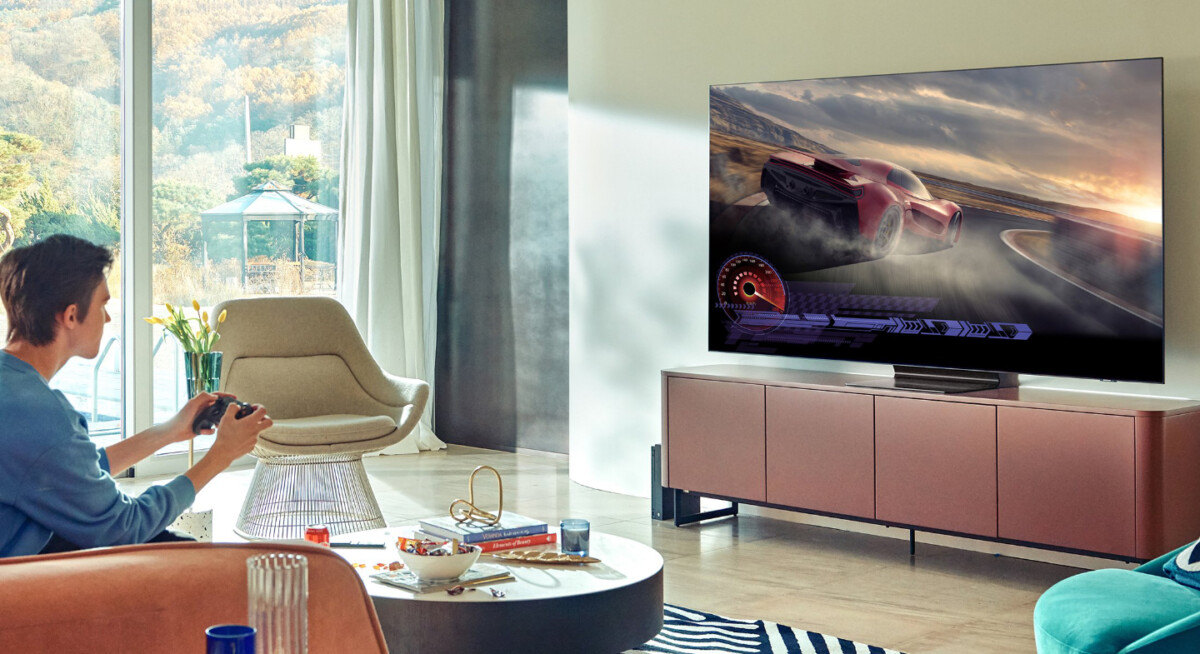 But why wait, when the Korean manufacturer’s mastery of upscaling is already making it a reality? With 8K upscaling by Samsung, you can now enjoy the best of your favorite video games on the big screen. Each detail carefully refined by the graphic designers will be highlighted here, better defined for an even more intense video game immersion. The whole thing benefits in addition to a flawless animation at 60 fps, thanks to the Neo QLED panel in 120 Hz and the FreeSync Premium Pro.

With its range of 8K televisions, Samsung therefore offers the best picture quality available on the big screen, whatever your 4K source. This includes broadcasts from the upcoming EUFA European Cup which will make you feel like you are right in the middle of the action with these Samsung 8K TVs.

Which Samsung Neo QLED TV to enjoy all its content in 8K?

In mid-2021, Samsung released two new Neo QLED TVs with 8K screen definition. Some differences exist between these two models, in particular at the level of the luminous peak, the design or the on-board audio system. But they all share the integration of a Mini LED backlight system coupled with a QLED filter. There is also the new Samsung remote control, which works on solar energy and which eliminates the need for batteries.

The Samsung Neo QLED QN900A is quite simply the flagship of Samsung televisions. It has a stunning 8K panel that takes advantage of an ultra slim design and an Infinity (borderless) frame that makes the image seem like it literally floats in front of your eyes. The colorimetry, the contrasts, the deep blacks are sublimated by a luminosity of 2000 nits, which makes the image even more vivid. Its anti-reflective filter allows you to enjoy the best image quality, whatever the brightness of your environment. This ultra high-end television is also accompanied by a One Connect remote box, which includes all the connections so that a single cable then connects the remote box to the TV. Luxury down to the details. 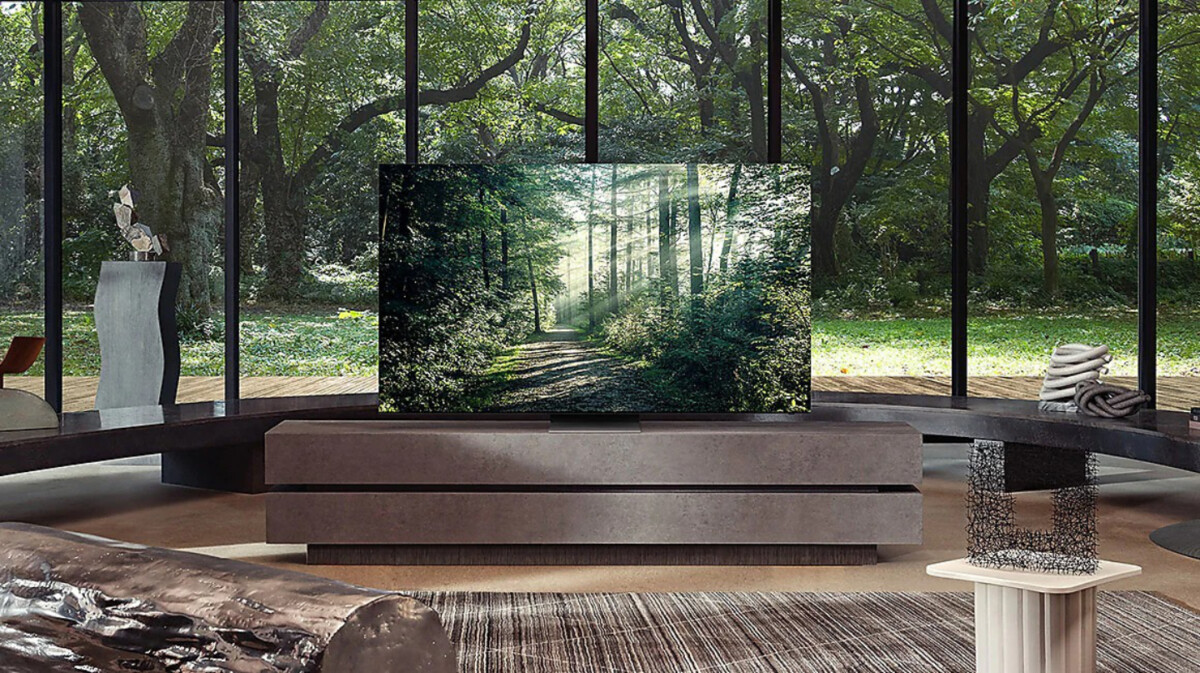 The Samsung QN900A starts with a 65-inch screen diagonal, but it is also available in 75 or 85 inches. Count 5499 euros for the smallest diagonal with the refund offer of 500 euros.

The Samsung Neo QLED QN800A is the model just below the QN900A. The main difference here is that it doesn’t have the Infinity frame and its super-thin bezels. But for the rest, with its 15 mm thickness and elegant design, this television is a real showcase for a beautiful 8K image. Its 1500 nits brightness exceeds what the vast majority of OLED products offer. And it also has the One Connect remote box. 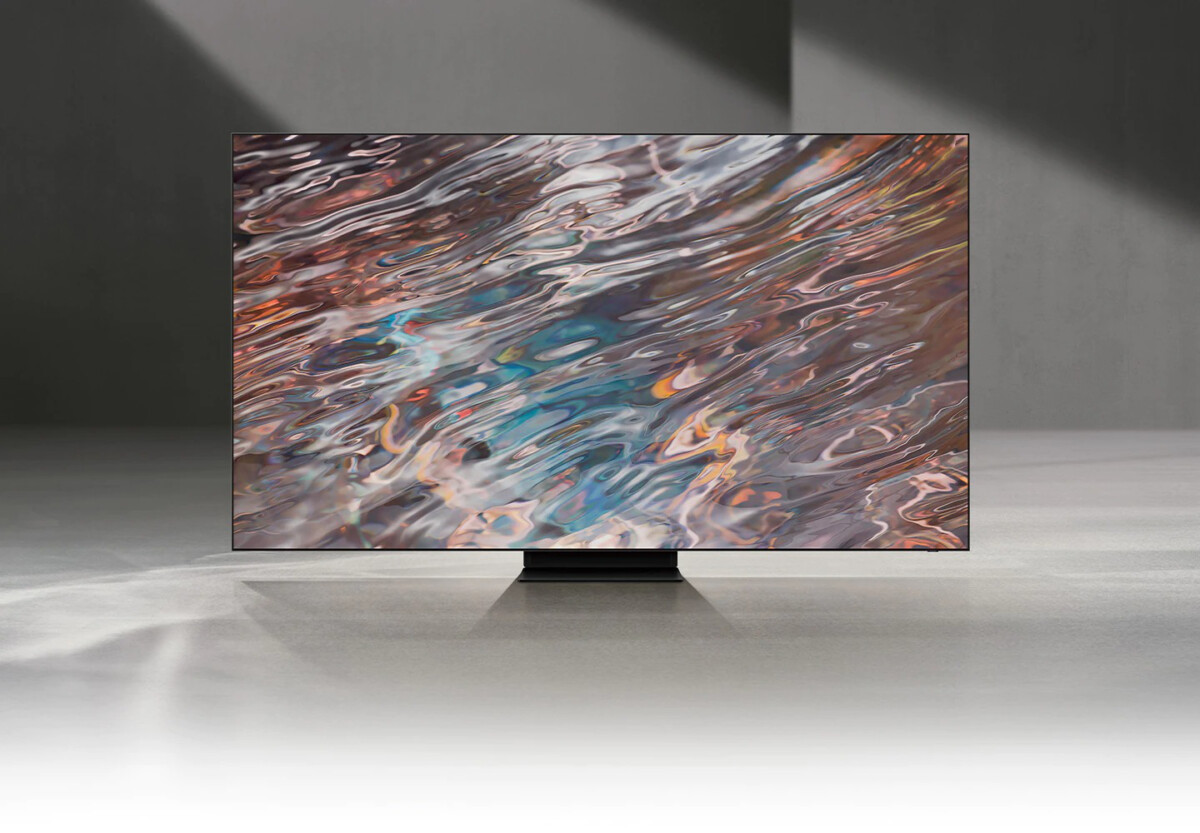 The Samsung QN800A also starts with a 65-inch screen diagonal, but it is also available in 75 or 85 inches. Count 3499 euros for the smallest diagonal with the reimbursement offer of 500 euros.

PREV Fancy a new iPad? Here’s a good reason to wait until 2022
NEXT NASA sends luminescent baby squids and tardigrades into space

FaceTime finally on Android and Windows? Yes, but only on browser