Computex was an opportunity for AMD to unveil its new Navi2 / RDNA2 mobile graphics cards and also allow Asus to reveal its Asus ROG Strix G15 and ROG Strix G17 Advantage Edition, two gaming laptops with 100% AMD architecture. On the program for these two machines, ROG Intelligent Cooling innovations for cooling, 300Hz or 165Hz screen options with AMD FreeSync Premium and a tailor-made look thanks to the “Armor Caps”. 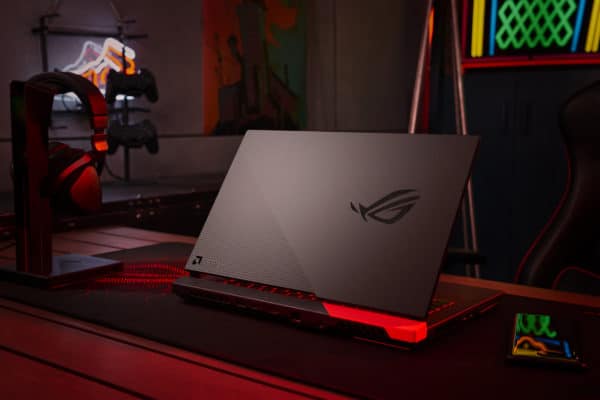 Asus is aimed directly at eSports enthusiasts with its new G15 and G17 Advantage Edition, pros and amateurs alike. Indeed, they are among the first to integrate the new graphics chip of the series Radeon RX 6000 Mobile. These new GPUs provide high performance and better power efficiency. They are built on an AMD RDNA 2 architecture that brings together Ray-Tracing, computing power and graphic effects to offer more realistic visuals and more intense immersion. The Radeon RX 6800M (12 GB VRAM) high-end has more than enough power for smooth graphics on a wide variety of games. Other less powerful graphics options are also being considered but not specified by Asus, probably Radeon RX 6700M and Radeon RX 6600M.

Alongside it, the Asus ROG Strix unsurprisingly welcomes the latest AMD Cezanne processors based on the Zen 3 architecture, AMD Ryzen 7 5800H and Ryzen 9 5900HX Octo Core (up to 90W via ROG Armory Crate utility), assisted by 32 GB of DDR4-3200 RAM and M.2 NVMe SSD storage up to 1 TB. The ROG Strix G Advantage Edition are also equipped with an additional M.2 slot to upgrade the initial configuration. It is not specified but they should be configured in RAID0.

Asus has done a lot of work on the cooling system of its ROG G laptops with performance materials (massive vapor chamber, two 84-blade fans, liquid metal conductor, four heat sinks, self-cleaning module 2.0) and smart technologies like the infrared sensor that monitors internal temperatures in real time, allowing the system to make adjustments to keep the keys below 40 ° C. Features like “Synergy Smart Shift” meanwhile allow you to distribute performance where you need it, by adjusting the cooling, while containing the sound level.

The design of the two laptops does not change especially compared to the existing G15 and G17 and Asus retains its customizable character thanks to the “caps” these small interchangeable covers at the hinge. Otherwise, the metal case is black but thanks to the Aura Sync lighting, the customization is no longer limited to the colors of the chassis but extends to effects and visualizations. The 4-zone RGB keyboard and the three-sided light bar illuminate the environment and create unique effects.

Asus also announces that it has worked on the audio and microphone part of its gaming PCs with Dolby Atmos speakers and the Two-Way AI Noise Cancelation function which eliminates up to 95% of background noise at input and output. Distributed on the back and the left side, the connector receives an HDMI output, an Ethernet port, a USB 3.2 Type-A and USB 3.2 Type-C port (compatible with power supply and DisplayPort). Two more USB ports are available on the left side, as well as an audio jack for your headphones.

A 90Wh battery is integrated and offers a battery life of up to 11.4 hours of video playback according to Asus, while fast charging saves 50% battery in just 33 minutes.