In 2000, Microsoft attempted to buy out Nintendo. The Xbox Museum unveils a letter from the time sent by Microsoft to Nintendo.

At the turn of the century, Microsoft was at the top of the new technology world. The firm takes a dim view of the arrival in force of Sony in all the living rooms with a new kind of computer which does not speak its name: the PlayStation. Already present in video games through the PC, Microsoft is thinking about getting into the world of consoles.

We do not improvise manufacturers of game consoles. To sell consoles, you absolutely need games. If possible, games that will not be found on other consoles. Microsoft is therefore considering making a big buyout: nothing less than Nintendo itself. The story is not totally new, it has long been the subject of rumors and Microsoft has discussed it openly during interviews around the 20th anniversary of the Xbox. Today it is the Xbox museum which brings a new piece to the file.

Microsoft posted the “Xbox Museum” online this week. It is an interactive experience available on the web that allows you to discover or rediscover the main features of the 20 years of Xbox history. The thing is quite well done and allows to review strong events of the brand, from its creation to more difficult moments like the launch of the Xbox One or the Red Ring of Death Xbox 360. The museum is also dotted with archival documents, videos and explanations. 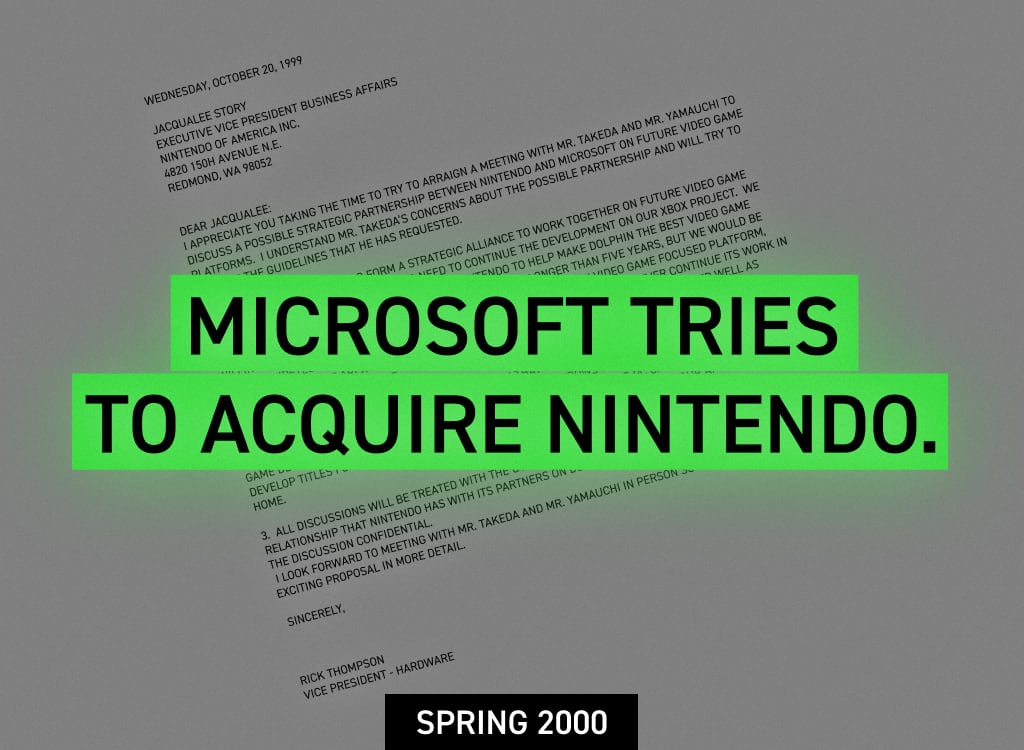 The document that interests us here is a letter sent by Microsoft, and more precisely Rick Thompson in charge of hardware at the time, in the spring of 2000 to the American branch of Nintendo. The content is not fully readable, but we can still read that it is a request for a meeting with Takeda, in charge of technology at Nintendo, and Yamauchi, president of Nintendo at the time. The goal would be to sign a strong partnership for “future video game platforms”.

We can also discern that Microsoft proposed to offer technological support to the Dolphin, code name of what will become the Gamecube, to make it the best console possible. Behind this first step, the objective for Microsoft was actually to acquire Nintendo. We imagine that the firm wanted to make Nintendo the official developer of future Xbox games, while Microsoft took care of the hardware and the technological object.

Obviously, we know the rest of the story. No buyout took place and the strategic partnership never happened. In the great history of game console manufacturers, Microsoft will even rather seek a filiation with a historic competitor of Nintendo: Sega. The latter stops the costs with the Dreamcast, and for some, the Xbox 360 will be the heir to some of Sega’s strengths such as online gaming. However, we may wonder what the video game would look like today if Nintendo had been acquired, long before the Wii, the DS or more recently the Switch.

To follow us, we invite you to download our Android and iOS application. You will be able to read our articles, files, and watch our latest YouTube videos.

PREV Oppo Unveils Reno7, Reno7 Pro and Reno7 SE with Innovative Design and Great Value – Notebookcheck.com
NEXT Metroid producer believes in the future of the series and wants Samus on the big screen – ntower