Page 1: Models, P and E cores, DDR5 information: Everything about the start of Alder Lake-S

In keeping with the revival of the IDF alias Intel On, Intel’s next desktop generation is also being launched today. With Alder Lake, Intel wants to turn things around before they want to be completely back on the road to success with Meteor Lake and production in 7 nm. Today we are talking about the information we have known so far and what we will be looking at in a few days in the form of the benchmarks.

In its capacity as a desktop processor, Alder Lake-S describes only part of the new product generation and itself only part of this, because today we are only talking about the information previously available on the K models for the high-end segment. More desktop processors based on Alder Lake will follow, and the official starting shot for notebooks should only take place until the turn of the year.

Alder Lake describes a big leap in Intel’s CPU development. It is the first performance hybrid design. The processors use different cores designed for different tasks. With Lakefield, Intel dipped its first toe into the water of hybrid designs, but failed here due to the numerous limitations in this segment. As a test balloon for the cooperation of hardware and software as well as the production of such a processor, the gain in knowledge for Intel should have been not insignificant. 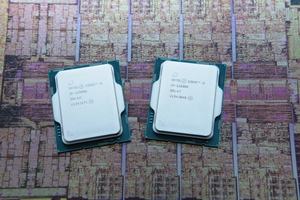 In addition, Alder Lake is the platform for Intel to introduce several new standards into the desktop market – not as the sole initiator, but as a large part of the ecosystem involved. The Alder Lake processors offer a memory controller for DDR5, which is also used right away. The processors also have PCI Express 5.0.

Only the K and KF models are presented today. Before we go into the architecture and other details, a first overview:

Common to all processors is the support of DDR4-3200 and DDR5-4800. However, this only describes the JEDEC specifications, because regardless of whether with DDR4 or DDR5 – the Integrated Memory Controller (IMC) can do significantly more in conjunction with good memory. We’ll go into the subtleties of the gear modes in the memory tests. Operated with DDR4 memory, two memory channels are addressed, with DDR5 these are divided into a total of four, which is one of the measures for a higher data transfer rate of DDR5. A maximum of 128 GB of RAM can be installed. In addition, all processors offer 16 PCI Express lanes based on the latest 5.0 standard and four more based on 4.0.

The KF models do without the integrated graphics unit. For the first time in a desktop processor, this is based on the Xe-LP architecture and has 32 execution units. We will also take a look at the benchmarks, which we should publish in a few days, to see whether the DDR5 memory with the higher bandwidth has advantages to offer.

The top model is the Core i9-12900K (F) with eight performance and eight efficiency cores that reach a clock rate of 5.1 and 3.9 GHz, respectively. The L3 and L2 cache depends on the number of active cores and is the largest here. The base TDP is 125 W. The Core i7-12700K (F) is again a real “700K” and, unlike Rocket Lake, does not only differ from the larger model in terms of binning. Intel switches off an E-Cores cluster here, so that we have a processor in 8 + 4 configuration in front of us. Accordingly, the L3 and L2 cache are also slightly smaller. A few hundred megahertz have to be cut back when it comes to clock speeds. The Turbo Power is reduced from 241 to 190 W.

The elephant in the room is certainly a new standard for the consumption of the processors. There is no longer any distinction between a PL1 and a PL2. The PL1 previously described a limit that the processor was allowed to reach under prolonged load. The PL2 should only be present for 28 or 56 s. For Alder Lake, PL1 and PL2 are identical. A Core i9-12900K can therefore consume 241 W permanently – if the supply via the mainboard and the cooling allow it. The processor only falls back to the TDP of 125 W if the supply and cooling are insufficient. There is no longer a rope as the duration of the PL2.

In the UEFI of the Z690 mainboards, this should already be taken into account in the current versions. The measurements will show whether and how long a Core i9-12900K actually pulls the 241 W out of its socket in the end. Intel can certainly afford this for the desktop, but you will not be able to use this trick with the notebooks.

Availability from next week

All six Alder Lake processors should be in stores from November 4th. According to Intel, thousands of processors will be manufactured this year. By the end of the first quarter of 2022 it should be two million. With this, Intel would like to underline that it is taking on the challenges of the global semiconductor crisis and would like to find ways and means to counter it.

The price for Alder Lake-S with the Core i5-12600KF starts at 264 US dollars. We do not yet know the euro prices. As always, Intel only mentions the dollar prices for orders of 1,000 units. The variant with an integrated graphics unit costs 289 US dollars. The Core i7-12700KF will change hands for $ 384. With iGPU, it’s $ 409. The top model Core i9-12900K is said to cost 589 US dollars, while the KF is called 564 US dollars. With this, Intel positions the new processors slightly above their predecessors based on the official price list. 16 cores from Intel are therefore also cheaper to get than 16 cores from AMD (Ryzen 9 5950X). The same applies to the other models compared to the competition. The benchmarks will only show whether this is even permissible.

In addition to the six models of Alder Lake processors, Intel is also showing the first Z690 as a chipset today. There will certainly be other chipsets, but Intel will not comment on them today.

<>Models, P and E cores, DDR5 info: Everything about the start of Alder Lake-S
The performance and efficiency cores

PREV Pokémon Shining Diamond and Shining Pearl: Speedrunner ends the adventure in under 35 minutes – ntower
NEXT the new games for november 2021