What are the cinema releases for the week of October 27? The French Dispatch, La Fracture, Last Night in Soho, Pig, Barbaque, Lui…

Every week, Ecran Large makes its market in cinemas, and selects some essential films (for good or bad reasons).

Live from the projection booth

THE OUTPUTS WE RECOMMEND FOR YOU

The story : Following a bad fall and yet another marital crisis, Raf ends up in the emergency room with a broken elbow. Stranded for one night in a hospital on the verge of the crisis, she meets a truck driver injured during a demonstration of yellow vests, while the capital is set ablaze, outside.

The reasons to go see The divide : Yes, the term “shock film” is overused, and cooked with all the sauces for beautiful titles and announcement effects. Corn The divide the merit, so much the film directed by Catherine Cosrine (The New Eve, The Beautiful Season) proceeds like a tornado, with insane energy on all levels.

First with its history, stretched between the outside (the famous demonstration of yellow vests, which set Paris on fire in December 2018) and the inside (an emergency service on the verge of rupture), between the history of all (the political and social crisis) and the intimate story (the breakup of a couple). In the emotion then, since The divide alternates between laughter and tears, with real scenes of comedy, and pure moments of drama. Finally, in the casting, with Valeria Bruni Tedeschi, Marina Foïs and Pio Marmaï obviously fantastic, but also and above all Aissatou Diallo Sagna, nurse who plays her first role in the cinema here. Or an astonishing and explosive cocktail on all levels, which makes The divide an incredible, swirling and important film.

The story : The magazine The French Dispatch has just lost its founder and director of the publication. The film therefore tells the story of the magazine through the reports of its last issue and the meetings of its many editors.

The reasons to go see The French Dispatch : We will avoid making a list of all the actors and actresses present in the feature film and who would allow everyone to find a single good reason to rush into theaters. In truth, Wes Anderson has delivered several jewels in recent years including his sublime The island of dogs in 2018. See him again at the helm of a live action as ambitious as The French Dispatch is therefore a must.

And undoubtedly, the feature film enjoys extraordinary qualities and above all an artistic direction of maddening richness. The director has never created such an abundant universe on the screen.. Well helped by the multitude of stories he tells, he relies on magnificent sets while alternating color and black & white to better enrich the density of his visual feast (until a great animated passage).

Too bad that this technical mastery is not at the service of a real purpose. If it pays homage to journalism, art and France, The French Dispatch is above all an accumulation of sketches that are too wordy for their own good. Worse, Wes Anderson’s formalism prevents the film from creating an ounce of emotions or laughter, making these joyful wanderings often a little vain, constantly uneven.

The story : Éloise leaves her native countryside and arrives in London to join the design school of her dreams. Except that on the spot, all is not rosy. So to comfort herself, she escapes to the London of the Sixties with nostalgia and admiration. But to venture too far into the past, his fantasies could quickly turn into a real nightmare.

The reasons to go see Last Night in Soho : The very evidence is that you simply should not miss an Edgar Wright film in the cinema. The man has not only made great films, but to see him at the helm of a new genre, he who opens the doors of horror with Last Night in Soho, is reason enough to pounce on it. And if, in addition, we tell you that the feature film is the director’s most virtuoso, there is no longer any reason to be reluctant.

It’s very simple, Last Night in Soho is surely one of the greatest visual achievements of the cinema year. Juggling between ingenious sequence shots and clever games of mirrors, shadows and glances, its staging is jubilant, all the more so when it pays homage to a whole section of the 7th art, from giallo to zomblards. Further still, the film manages above all to modernize all its references to give this fantastic and paranoid delirium a contemporary reflection on women and past ideals.

To be honest, Edgar Wright’s film largely undergoes its overwritten script in the overly illustrative home stretch (and putting aside its sensoriality) and the finale is more disappointing than pleasing (on the way in which it is brought, and not its stakes). It prevents that Last Night in Soho offers a fascinating lyrical journey, punctuated by some terrifying images.

The story : Rob is a hermit who trades his pittance for truffles his pig digs up. When the animal is stolen from him, he leaves his daily routine to find it, guided by his young buyer.

The reasons to go see Pig : There are few sensations more pleasant than that of being surprised (for the better) in the cinema. The pitch of Pig, the presence of the monumental Nicolas Cage in the casting and the relative inexperience of the director Michael Sarnoski made it an under-John Wick broke in the imagination of many moviegoers. And yet, the film voluntarily goes in the opposite direction and prefers to dig the identity of his characters rather than their skulls.

The trajectory of the protagonist camped by Cage will therefore hurt, but not literally. He ended up desecrating an entire civilization turned towards the sirens of prestige, to the point of absurdity. It is not with the force of his fists that he carves his way, but thanks to a power of evocation and the power of narration. Equipped with his own weapons, he sows doubt rather than chaos, emotion rather than euphoria. Pig therefore risks disconcerting a large part of its audience, and this one might like it.

The story : What happens when a couple of butchers are a little fed up with vegans? They throw a good big meat party, and meet in Bring the accused in.

The reasons to see Barbaque : In the vast and not always glorious landscape of French comedy, Fabrice Éboué holds a place decidedly apart. The comedian, ambassador of a good fat laugh with good franquette, proved to be a filmmaker often more fanciful, aggressive and political than expected. After Starting point, The Botswanga Crocodile or Coexist, we therefore find him, in front of and behind the camera, alongside Marina Foïs.

Here he combines the acid dimension that we know him, with a more voluntarily parodic and absurd vein, rather discovered in his last feature film. The result is a serial killer film pastiche and a deeply uncomfortable romantic comedy, which advances on terrain as difficult as it is risky, but which Eboué appropriates with disconcerting ease. Indeed, the story is punctuated by jolts of unpredictable hilarity, a number of brutal finds or comic nuggets of a effectiveness as formidable as it is ambiguous.

We will simply regret that this taste for the bleeding valve and the gore discomfort is often diminished by otherwise heavier or expected gags, which date the whole and regularly take it away from its macabre strangeness to make it regain the shores of the supra-bourgeois laughter.

THE FILM THAT WE WERE NOT SHOWED, BUT NO PROBLEM, WE WILL CATCH IT QUICKLY

The story : He is a musician who has lost inspiration. He is also a man who has just left his wife and children. He is this tortured artist who wants to find himself in an isolated Breton house. He is also Guillaume Canet.

The reasons to go see His : An essential reason, namely the versatility of Guillaume Canet. The fact is not so common in French cinema, but the screenwriter and director likes to touch all genres, with an impressive absence of complex, which leads him to sometimes offer us authentic finds, sometimes improbable chicks, even a curious mixture of the two.

Will this introspective fable be a popular genre proposal at the Do not tell anyone ? A bourgeois ego trip like this We will end up together ? Or a hallucinogenic experiment like Rock’n roll ? No one knows, and that is what makes the company so salty. The bad tongues will not fail to see there the promise of a narcissistic delirium bordering on the ridiculous, the fans a new cinephile adventure. One thing is certain, we will send a kamikaze to the front line at 9 a.m., to enjoy this film that titillates us.

The Large Screen rating: we don’t know it yet.

The story : Arnie Cunningham isn’t very good about himself, and the thugs in his town are sure to make him pay for it. But his life changes when he acquires a new car, which gives him back his self-confidence. Except that when the teenager finds a girlfriend, he realizes that the car is not sharing.

The reasons to go see Christine : When John Carpenter finally tackles Stephen King, a whole section of popular cinema culture of the 1980s finds itself frozen on film. And if Christine Surely neither Carpenter’s best movie nor King’s best adaptation, it sure manages to set itself up as a symbol of an aesthetic, a musical universe (superb score by the composer), practical special effects and a treatment of the teen movie that only belonged to his time. 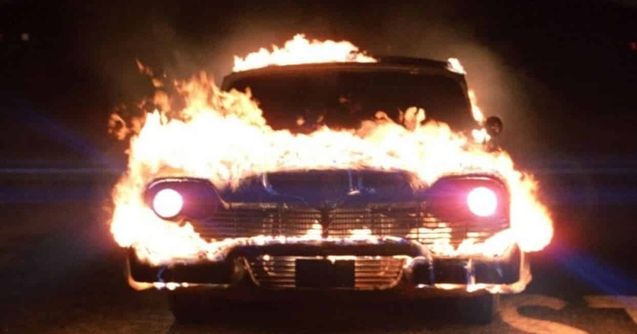 We’ll have to ward off the shock

We can go see again Christine for the shot of nostalgia, therefore, but we can also take savor its buried darkness, characteristic of the writings of the writer, and which can only triumph behind the camera of the director ofHalloween. The youth described by the film struggles to cling to its sincerity, in an environment where psychological violence and the temptation of destructive materialism reign.

And then there is the famous Plymouth 57, one of the most iconic of the Carpenterian antagonists, which gradually goes from sensual mechanical to demonic engine. The staging of the master manages to make him a full-fledged avenging character, even a monstrous entity, in a sublime fiery sequence that has remained famous and obviously to admire on the big screen.

Our file on the film

PREV Ex-ÖVP club boss Lopatka: “Mitterlehner would be well advised to keep silent”
NEXT More than 600 mayors have they really given their support to Emmanuel Macron? – Release