Quite clearly dominated, Monaco managed to dye the PSV (1-2), this Thursday, during the 3rd day of the group stage of the Europa League. A real hold-up of the princely formation which alone takes the reins of group B.

Volland was invaluable to Monaco.

A hell of a hold-up! On the ropes for nearly an hour, Monaco managed to beat PSV (1-2) on Thursday as part of the 3rd day of the group stage of the Europa League.

A score that does not necessarily reflect the physiognomy of the match as the princely formation suffered in the second period. But she never broke and ended up winning to leave the Netherlands with the three points and the head of Group B halfway.

In a warm Eindhoven atmosphere, the game started off at a high pace. Despite the Dutch pressure, Monaco was more dangerous with in particular a strike from Jean Lucas stopped by Drommel. Domination quickly rewarded with the first goal under his new colors from Boadu, who took advantage of a superb serve from Caio Henrique to slip the ball between the legs of the opposing goalkeeper (0-1, 19th).

Stung, the PSV passed the second. Pushed by a very noisy public, the Batavians were more aggressive in the duels and sharp against, the image of an attempt saved in extremis by Disasi. Over the minutes, the match felt more and more suffering and Monaco, although dominated, could have dyed the Philips Stadion if Boadu had not lacked lucidity, alone against, when adjusting his shot shortly before. the break.

Coming back from the locker room, the Eindhoven club were pushing very hard. But Vinicius, twice, and Gakpo, stumbled each time on Maripan and Nbel, very vigilant in front of their goal. By dint of undergoing, the punishment fell for the ASM. On a loss of ball from Disasi, Gakpo relied on Vinicius before deceiving the German goalkeeper with a heavy strike low to the ground 20 meters (1-1, 59th). A well-deserved equalization for vacant premises.

Aware that his troops were no longer responding, Niko Kovac brought new blood with many changes and a tactical modification to curb the enemy’s pace. A plan that bore fruit since the PSV was therefore less dangerous, paying its standards for more than an hour. Better yet, Diop, served by Caio Henrique, delivered his own by deceiving Drommel with a furious tackle late in the game (1-2, 89th). The Monaco robbery!

A real European Cup match in a very hot venue! Quickly ahead, Monaco can be happy to have left the Philips Stadion with such a victory as it was so complicated during the last hour. The PSV quite clearly dominated the debates by offering an exciting performance with a Gakpo which made a strong impression. Overall a nice meeting to follow, with a happy ending!

– On the left side, Caio Henrique addresses a sharp cross in Boadu’s race. The Dutch striker passes in front of Obispo to slip the ball between the legs of Drommel (0-1, 19th).

– Max takes a ball from Disasi’s feet. Gakpo seizes it and goes up the camp of Monaco. The Dutch striker relies on Vinicius, who involuntarily hands him over. The young Batavian follows and unleashes a heavy strike low to the ground 20 meters to deceive Nbel (1-1, 59th).

– At the entrance to the area, Volland tears off and shifts Caio Henrique to his left. Not attacked, the Brazilian left side delivers a caviar for Diop, who throws himself to deceive Drommel with a furious tackle (1-2, 89th).

Maxifoot has awarded a score (out of 10) comments on each player.

An excellent match for the Brazilian left side. In his usual style, he crashed into his lane, bringing Boadu’s opening scoring a magnificent opening in the depth. Less visible after the break and forced to defend lower, he offers new Diop caviar for the winning goal!

Jol Drommel (5): the PSV goalkeeper can ruminate. He was decisive in two hot situations against Jean Lucas and Volland in the first half but was too easily overwhelmed by Boadu’s goal. On this Diop, he is let down by his defense, disorganized.

Philipp Mwene (5): the right lateral experienced a complicated first period, being too often had by Caio Henrique. He tightened the bolts after returning from the locker room to control the Brazilian left side … until the 89th minute, fatal for PSV.

Andr Ramalho (5): average. The Brazilian did not breathe serenity and struggled to align with Obispo. He lacked lucidity on several sequences.

Armando Obispo (6): the Dutch defender started the game badly by being fooled enough by Boadu on the opening score of the ASM. However, he recovered very well with several duels won against his compatriot throughout the match.

Philipp Max (6): the player passed through Augsburg was more than correct. In addition to having worked a lot on Aguilar, he is the origin of the goal of the PSV with a high recovery on Disasi. He didn’t blush from his match.

Marco Van Ginkel (6.5): the captain of the PSV answered now. His ball tricks hurt the Mongasques, who were not always able to slow him down. He distributed the game rather well.

Mario Gtze (4): disappointing. The only scorer in the 2014 World Cup final was absent from the discussions, suffering from the physical power of his opponents. He did not weigh in this game.

Olivier Boscagli (4): medium. The former Niois weighed too little, hiding too often in this match. He did too little to push his opponents to their limits.

Chukwunonso Madueke (5): stirring, nothing more. He was generally awkward on his piercings. He comes out hurt and frustrated. Replace the 56th minute with Yorbe Vertessen (non not).

Vincius (6): the former ASM scorer was in sight. He provoked a lot, stumbling twice on Nbel after returning from the locker room. He is a decisive passer on Gakpo’s goal. Replace the 87th minute with Eran Zahavi (non not).

Cody Maths Gakpo (7.5): Considered one of the greatest hopes of Dutch football, the young striker has hurt ASM badly. Still forward, he crashed heavily to corner his opponents. The Oranje passes the second after the break in equalizer on a goal which he himself created. He comes out touching the ankle. Replace the 64th minute with Bruma (non not).

Alexander Nbel (6): a bizarre copy made by the German goalkeeper. He was as reassuring on his line, with some important saves on shots from Vinicius and Gakpo, as he was frustrating on his openings at the foot. In the end, an overall convincing match. ASM fans take it!

Guillermo Maripn (6): the Chilean has nothing to blame on this match. He made the necessary interventions, including the one in front of Gakpo after returning from the locker room, to push back PSV. He donated his body on some very hot sequences.

Axel Disasi (5): the central defender, captain of the evening, was strong for an hour. His intervention on an almost decisive pass by Van Ginkel in the first period saved his team from a very likely Dutch equalizer. However, it was he who lost the fatal ball leading to Gakpo’s goal. An action that spoils his game. Replace 74th minute with Gelson Martins (non not).

B. Badiashile (5): an average encounter for Mongascian rock. Poison on the offensive stops early in the game, he struggled a little more in the duels with Vinicius and Gakpo, who made their speed speak to hurt him. He suffered on the whole.

Ruben Aguilar (7): a match that will give confidence to the right side. In a role of piston, he was comfortable and especially provided very great efforts in his hallway. Not everything was perfect offensively, but his generosity and constant focus discouraged his opponents in his zone. Very courageous.

Aurlien Tchouamni (6.5): a good match for the French international. The former Bordelais responded with authority in the rough duels engaged by the Dutch. Even if he was a little more in difficulty after the break, he never gave up to pick up the thread in the last quarter of an hour.

Youssouf Fofana (5.5): the former Strasbourg player was interesting in his ability to break the game with openings often felt in the first period. On the other hand, he suffered a lot in the less good period of Monaco. Replace the 70th minute with Eliot Matazo (non not).

Jean Lucas (4): good will, the image of his strike at the start of the match, but still difficulties to impose itself in the midfield. The Brazilian midfielder was jostled by PSV players in the midfield. He ended the match in turmoil, forced to see the opposing waves. Replace the 75th minute with Sofiane Diop (not rated), scorer of a furious tackle at the end of the match.

Kevin Volland (6.5): Admittedly, the German striker did not score, but his debauchery of energy has done a lot of good for his partners. His defensive retreats prevented the opponent’s first raise on numerous occasions. As he nosedived in the second half, he pulled out to deflect Caio Henrique on the second goal. A mind of steel.

Myron Boadu (6): the air of the country is obviously good! Mute since his arrival, the Dutch striker has finally unlocked his counter with a goal full of class on a service from Caio Henrique. An achievement that will reassure him, even if he eats the scoresheet before the break on a very badly negotiated cons. Replace the 70th minute with Wissam Ben Yedder (non not).

And for you, who were the best and worst players of the game? Respond in the “comments” area below! 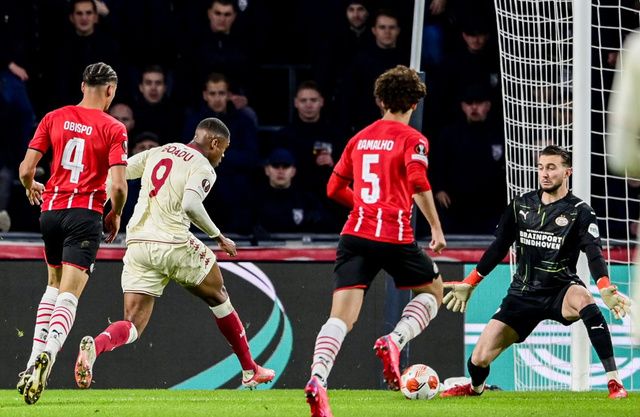 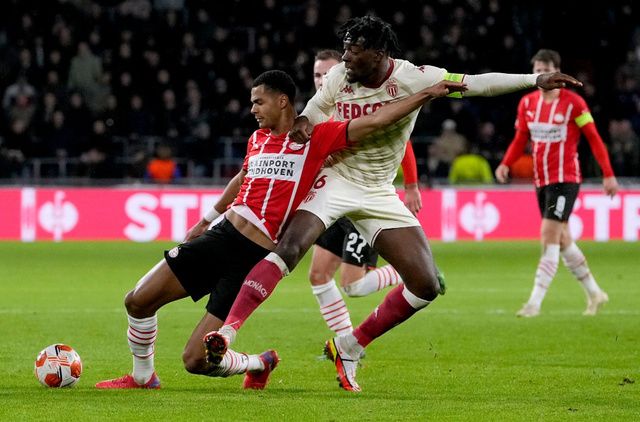 Nbel was reassuring on his line 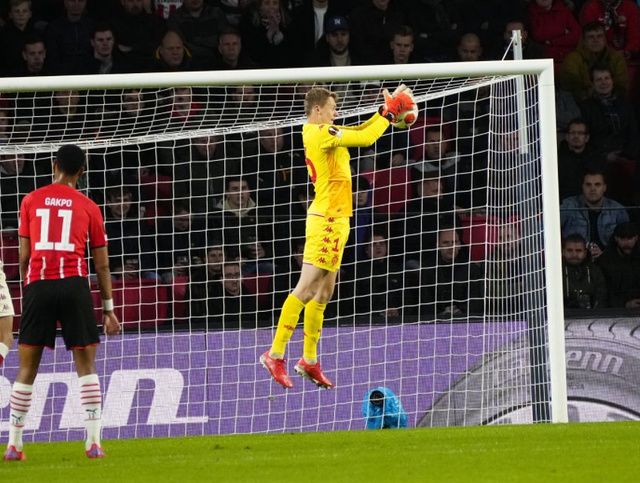 PREV Therefore, a veterinarian is not allowed to vaccinate against Covid
NEXT Woman found dead in cellar in Vienna-Brigittenau – crime

Griezmann sends Atlético to the knockout stages of the Champions League, Porto transferred to the Europa League