JTA – As summer arrives and the use of coronavirus vaccines is currently recognized as safe for children as young as twelve, some summer camps are raising the possibility of a mask-free summer for children. young campers vaccinated.

But a Jewish camp scheduled for this summer took a different approach: It strictly forbids any camper or vaccinated staff to participate.

Ads promoting Camp Hikon in upstate New York appeared on the popular server list within the Jewish community – days after headlines about a private Miami school that recommended to his teachers not to be vaccinated and who had asked his young students to refrain from coming into contact with people who have been immunized against COVID-19.

Receive our daily edition for free by email so you don’t miss out on the best of news Free registration!

The ads promoting the camp also ran as posters recommending against vaccine use popped up in Midwood, Brooklyn, an Orthodox neighborhood where one of the camp’s founders runs a drug store. natural food products.

These various events suggest that anti-vax propaganda and disinformation about COVID-19 are taking new forms in Jewish communities where skepticism and disobedience to public health rules have been relatively strong and criticized.

Posters discouraging people from getting vaccinated against COVID-19 in Midwood, a heavily Orthodox Jewish neighborhood in Brooklyn. (Credit: Luis Hernandez via JTA)

Camp Hikon has set itself the goal of preparing young boys for yeshivot to what he believes will be the “political, economic and environmental” changes to come. Even if he says he is interested in the idea of ​​preparing his campers for “natural disasters”, he will not allow children or vaccinated personnel to participate.

Naftali Schwartz, self-proclaimed “health coach” from the Brooklyn-born camp – who has no medical or public health training he could avail himself of – believes this rule is unlikely to rule out anyone.

“The majority of those who come will not have been vaccinated anyway because of the very nature of the population I am speaking to,” Schwartz explains to the JTA.

Taking up a theory – whose falsehood has been established – which has spread thanks to the anti-vax movement, the camp’s website cites “the experimental nature” of vaccines against COVID-19. According to this false claim, people who are close to those who have been vaccinated can “reinforce” the spread of the coronavirus. The online site directs readers to another site, NutriTruth, which claims vaccines are a “biological weapon” and which also directs Internet users to a discussion among several notorious anti-vax personalities.

“We regret being unable to accept campers or counselors who have already received their injections,” notes the website.

Schwartz says he decided to put the rule in place because of “suspicious symptoms that appeared in unvaccinated individuals who had spent a lot of time with vaccinated people.”

“It has also been reported to me by parents of my young campers that this information is real, which is worrying,” continues Schwartz. 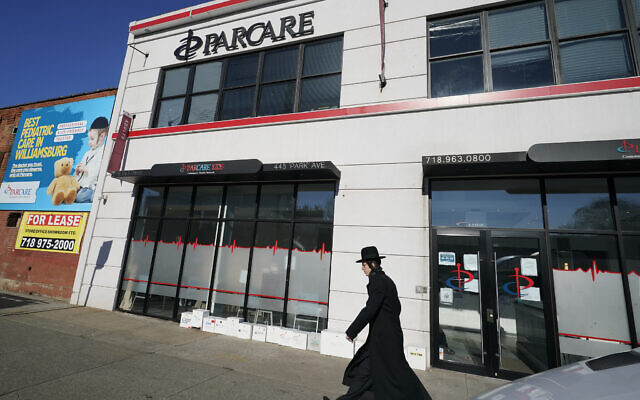 Other theories – which have yet been proven to be false – were echoed by posters that were posted this week in Midwood, a heavily Orthodox neighborhood in Brooklyn. The posters, which have not been signed, are intended to discourage Orthodox people from going for both doses because of, among other reasons, potential risks to fertility (studies have proven this claim to be untrue).

“Many, many Rabbonim who have thoroughly researched the COVID-19 vaccine strongly recommend that you NOT go for the vaccine, ”one of the posters says, using the yiddish denoting the rabbis.

The poster also includes a link to a pamphlet, on the internet, bearing the names of rabbis who have allegedly condemned the use of the coronavirus vaccine. He also promotes drugs against COVID such as hydroxychloroquine, which studies have shown to be ineffective. This drug was praised by Doctor Vladimir Zelenko, an Orthodox doctor who, until last summer, worked in the Hasidic enclave of Kiryas Joel and whose therapeutic protocol was praised by Donald Trump when he was still president of the United States.

This online pamphlet claims that patients do not die from the coronavirus. “They die for lack of proper treatment for COVID-19 or other negligence, or poor treatment in the hospital,” he says.

Anti-vax sentiment remains strong in some groups in the Orthodox Jewish community – a community that experienced a measles outbreak, in 2019, after a child who had returned from Israel spread the disease among other children not -vaccinated in Brooklyn and upstate New York. The outbreak was brought under control when the New York City Department of Health fined parents for refusing to immunize their children, and threatened to close religious schools that allowed unimmunized students to come. The state had ended non-medical exemptions for the school-based vaccination requirement, which had led to an increase in vaccination.

According to COVID vaccination data issued by the New York Department of Health, only 18% of residents of Borough Park are fully vaccinated and 28% are partially. In Midwood, these percentages are 22% and 30% respectively. In comparison, among residents of ZIP code 10024, on the Upper West Side – this is one of the areas with the highest vaccination rates in the city – 54% of residents are fully vaccinated and 65% partially immune.

It is impossible to say if Camp Hikon will actually take place. So far, no children have been registered and Schwartz has yet to get permission to hold the camp.

Illustrative photo: Children play on a sidewalk in the Williamsburg neighborhood of Brooklyn, New York, during the coronavirus outbreak on June 4, 2020 (AP Photo / Mark Lennihan)

But he already knows very well what the rules will be applied there. Wearing a mask will not be encouraged and, regarding the way in which the camp will fight against COVID-19, the young participants will be treated “with abundant vitamin D and other prophylactic means”, according to the website.

The camp appears to combine survivalist training with Torah study. The primary goal, Schwartz explains, is to prepare participants for a future in which political and economic instability, combined with unusual weather events, could lead to problems in the supply chain, issues that could impact in daily life. The campers will build their own lodges, according to the website, and the organizers will provide special shoes in this survivalist context.

“We are reaching out to a population of alert-minded families who understand that the years to come will not be like the years of the past,” concludes Schwartz.

PREV FIVERS hold first place in the HLA MEISTERLIGA, UHK Krems wins the Lower Austrian Derby
NEXT Weather: a lot of wind and rain this weekend

Halo Infinite is finally showing off new campaign gameplay, and today is the day

Tyrol – 16-year-old arrested after a series of fires