If you are asked to quote a Swedish actress, the most cinephiles among you will talk about the great Ingrid Bergman. Some, more liking Hollywood blockbusters, will perhaps speak of Alicia Vikander or Noomi Rapace – even, for the more clever, of Rebecca Ferguson. No doubt, in the years to come, the name of Sofia Kappel will also be recognized.

We know that we can very (too?) Easily get carried away by a remarkable performance, especially from a stranger to the battalion who hits hard from his very first role in the cinema. But we challenge anyone to tell us honestly that we can easily guess that Kappel, star of the big Pleasure, is a beginner.

“A matter of life and death”

In her own words, Sofia Kappel had a rather banal childhood after all. Apart from a separation from his parents at six months, nothing to report. Three big brothers, a sister who will land in her life when she is 9 years old. The quiet suburb of Stockholm, in short. Well, and a daddy turned priest – “it’s true that it’s a bit the only strange part of my youth”, she admits, before specifying that he really liked Pleasure and that he’s his biggest fan, “even if he says he has closed his eyes a lot”.

The picture is however never all white or all black. And in this presentation, an element comes to disrupt the sweet life of the young Sofia: the depression which touched her, and with which she had to live from 8 years old. Later, she testifies that she suffers from an illness that she presents as dysmorphophobia, which will appear around her 14th birthday.

She describes this disease as follows:

“It’s a bit the same as anorexia in the sense that what I see in the mirror is not the same as what other people see. And my real problem has always been my face.”

A mental disorder that haunted his daily life throughout his adolescence, and later still. After years of struggle, she decides to start a new therapy which, in her own words, is then a “question of life or death”. An attempt to get better, which will bring him straight in front of Ninja Thyberg’s camera.

“During this therapy, you would make a list of situations where you felt unsafe or vulnerable. Then you had to classify them by level of difficulty. At the top, I had for example ‘going to work without makeup’. J “difficulty level, 200%. I would rather die than do that. And the goal of the therapy was to force yourself to do just that, to prove to yourself that you weren’t going to die.

One day, I tell this to a friend we have in common with Ninja, and he tells me that he has a friend who is planning to make a film. She was looking for someone who matched me. He asked me if I wanted to audition, and my first thought was’absolutely not, I do not see anything more difficult for me than to pass an audition ‘. That’s why I did it. I didn’t want to know the scale of the film, I thought it would be for an indie short that nobody would see that I wouldn’t have the part for. It was just for therapy, to make me feel better. “

Suffice to say that the surprise was significant when she realized that the auditions were huge: Ninja Thyberg explains having spent a year and a half meeting more than 600 young women, and having been in contact with 2,000 people in total for find the pearl. She starts freaking out in front of the line of actresses and a casting director who spends her time making calls to gather more people. So she’s freaking out.

It is Ninja, seeing her tremble like a leaf, who will reassure her as best she can. In asks her to choose a scene in which she recognizes herself the most. Suffice to say that the young Sofia, still suffering, will not dig into the harshest or violent scenes, but more accessible. The magic then operates:

“I took a bite out of a scene that wasn’t on the edit but it was a scene where Bella [le nom du personnage qu’elle incarne dans le film, ndlr], was reuniting with his brother in Sweden, so I thought of my own brother and had an out-of-body experience. I wasn’t me anymore, I was Bella which was very nice, because I was in so much pain with my sanity that it felt good not to have my problems anymore.

As soon as I became Bella, everything was gone. I didn’t think of myself the same way I do in everyday life at all. It did me a lot of good, I was very excited to be able to relive it, and Ninja told me that she would like me to do a second one. “

The machine is launched, and the hope nourished by the possibility of being cured by the game does him a lot of good. “I was sick for a really long time, […] I couldn’t have survived very long like that “, she says, proud of herself. Because she says it: this role healed her completely.

The game as a remedy

I have to say that Pleasure is self-centered. Sofia is omnipresent throughout the film, filmed very closely. Often without make-up moreover, which was not without pain for the person concerned. But precisely. It is undoubtedly the intensity of the role and the proposal which forced the actress to do violence to herself, and which helped her to regain her self-confidence.

“Ninja’s biggest priority has always been me and if I was okay. As soon as something went wrong, we found another way, a solution.” 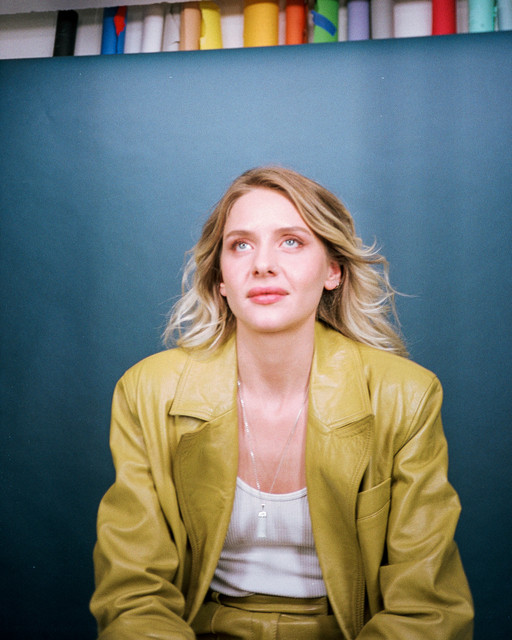 It goes through a lot of discussion, a lot of preparation, a lot of rehearsals. But above all a dialogue on the limits of what each one wants or can do. A healthy environment, unlike the one depicted in the film, which allowed him to overcome his illness, and find a vocation:

“I didn’t just find something that I loved doing, or that I was quite good at, but also something that made me feel so good. And helped me more than anything.”

Still, the end of the film was painful for the latter. The experience lasted nearly two years, and upon leaving, confidence returned, allowing him to overcome the troubles he had experienced so far. But then the question arises: what do we keep from a role? For many months, Sofia Kappel “gave” her appearance and body to the character. “Sofia no longer existed”, allowing her not to think about everything that haunted her on a daily basis. But what about when it all ends?

“What was Bella and what was Sofia? Because they were mixed up for over two years, it was hard to cut. Especially since it was my first movie. I’m kinda glad it was casually tough, because it gave me some space to keep a little bit of Bella with me. Her confidence, above all.

I had never played, so it was hard, but I’m really not traumatized by this shoot, it’s more the reverse: I’m much stronger and confident, and I found something that I want do until the end of my life. So I am happy. He saved my life.”

Once the separation is well established, there is one last step: the release of the film. And there, too, the fear was high. Critics are unanimous on the quality of the feature film. The proof, if necessary, his Jury Prize at the Deauville American Film Festival. “Deauville will always have a special place in my heart”, explains the actress.

She tells, quite moved, the Swedish premiere, where during the standing ovation out of a crowd of 700, she thought she was going to throw up on her producer’s feet, before crying and blackout. As if she refused to face success. No matter how closely she scrutinizes the number of entrances to theaters at home, this denial remains a protection like any other.

“To protect yourself, you imagine the worst by telling yourself that this is what is going to happen. So I thought to myself that I was going to suck, that people were going to hate the movie and that, worst case scenario, I was just going to find myself naked on the internet until the end of my life. And when I saw the movie, I was reassured that I was not that naked, that the concentration was not on my body and my game is not so bad [rires].”

To the point of saying to herself that she has indeed found her vocation. She who studied law economics, who worked at Zara, and who continues, when she is not making red carpets, to work in a sales company and to spend her days in front of Excel tables (“yeah, I like the numbers [rires]”), intends to drop everything for the game.

Besides, she has already played in two other projects. Very different projects, because they contain very written dialogues, where Pleasure was only 90% improvisation. But she is serene:

“At least thanks to ‘Pleasure’, I did the hard part: I have already done my first scenes of very hard emotions, improvisation, a very long project and my first sex scenes. The rest will be bound to be much simpler in comparison. “

With her American agent on the alert and her Swedish agent receiving many offers, one thing is certain: Sofia Kappel will make a name for herself. And she deserves it enormously.

Prince Andrew: Royals wanted to prevent his trial – to protect the Queen

Jungle camp 2022: This is how Zietlow, Hartwich and Dr. Bob out – a candidate surprised

the moving funeral of Gaspard Ulliel